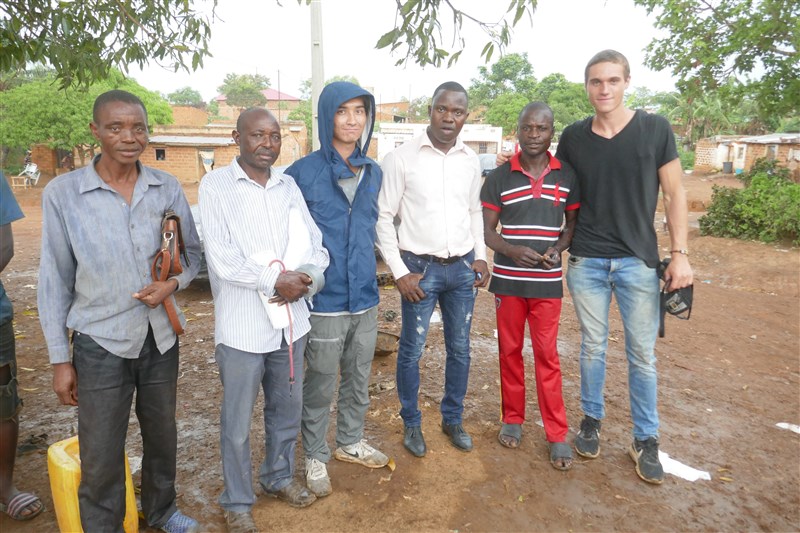 The day after, we arrived early at the roadside garage, as usual, and found our car in good condition with the gearbox in order again. A relief, but now we had to try and sell the car, maybe pay import taxes and god knows what, so it still seemed a bit difficult. When he arrived, we had José ask the mechanic what the car was worth and he estimated upwards of $6000! A totally unexpected, but wonderful number to hear. When we told them that we were looking to sell, some of the men started calling around and within a few hours we had a couple of interested buyers that had offered us $4600, which we were more than pleased about.

They were willing to go exchange the money into dollars and pay right away, but we were unsure about the laws of import and didn’t want to get held up by customs when exiting Angola, so we wanted papers on it. Therefore, we had to wait until Monday to get that done since it was a Saturday and public offices are closed during the weekends. On Sunday evening another buyer, John, who knew the mechanic that had been fixing our car approached us and said that he had to buy the car and that it was very important to him. We told him that we had others interested and that he had to pay more and get the paperwork in order, and therefore we wanted to meet with him on Monday along with the other interested part. He agreed to this and on Monday morning we were there at 08:00 as agreed upon, but the translator, José decided to be 3 hours late due to the rain that day although we had strictly told him 08:00 sharp. Since no one but John turned up it was fine that we didn’t have a translator available, since he spoke English, and we agreed to sell him the car for $4600. He went to exchange money and by the time he got back José had arrived and we agreed to hand over the car and the money that day and fix the paperwork and hand over the keys the following day. Since everything seemed to go really well we decided to unload all the equipment we had brought with us for the trip that was in our trunk. The whole neighborhood turned up as we started handing out gifts, everything from toilet paper and clothes to canned food and rope. We like to think that what we did there made a small difference, maybe not on a permanent basis, but probably for some time, as it was good equipment.

Just before 09:00 the following day John called us and said that he had the papers. We were super excited, not only had we sold our car for almost as much as we had bought it for way back in Germany, but we were getting papers on it for free! It seemed too good to be true, and sure enough those papers, although legit, were not import papers, they were just ordinary sales papers signed by a notary. This was a risk that we had to take at this point since a deal had already been made.

Later the same day, after having given José $100 for his trouble, we traveled by taxi (a land cruiser with 10 people in it) down to Luanda. The plan from here was to catch a bus to the border town, Santa Clara and then enter Namibia. We arrived in in the polluted capital city after 6 hours cramped into the front seat of the taxi. From there we got a ticket for a bus that left the same night to Lubango. We waited at the bus station for 2 hours before the bus arrived; this was our first taste of Angolan public transport. For the next 22 hours, we would inside of a vermin infested bus that was cold at night and hot during the day, before we finally ended up in Lubango Wednesday evening at 19:00. From here we would catch the bus to Santa Clara which was scheduled to depart at 23:59 but was of course delayed until 01:30. This night was even colder and we didn’t sleep good at all, needless to say we were tired when we arrived in Santa Clara the next morning at 08:30. As we walked the short distance from the bus stop to the border station, we were so nervous about customs. We were unsure if they had registered data that stated that we had brought a car into the country or if the luggage search would uncover the license plates in our bags. The emigration process was nerve wracking, but when he finally put the stamp into our passport without uttering a single word, we were so relieved. The luggage search didn’t reveal our license plates either so we were free to walk out of Angola.