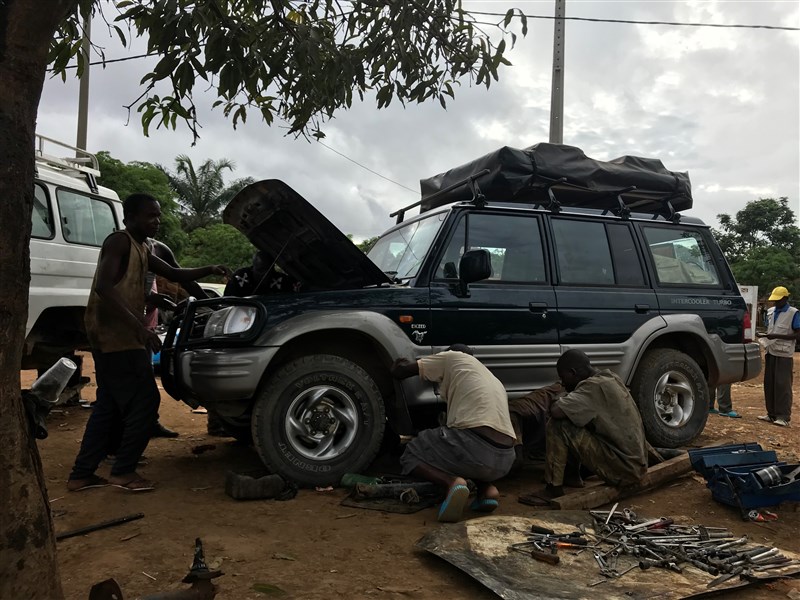 We managed to drive 62 kilometers into Angola before the inevitable happened. In the outskirts of the town, Mbanza Kongo our car met the wall with a loud noise and the reluctance to drive a single meter further.

It sounded like it came from gearbox so we pulled over to the side of the road where we tried to get it going again, this only resulted in loud grinding noises. Luckily we got contact with a man on the side of the road who spoke French in addition to Portuguese which they speak in Angola, so Luis was able to communicate with him. We gave him a small amount of money to go to a garage and get help and he arrived moments later with five more guys in two cars. The chief mechanic examined our car and soon reached a conclusion. He told us that our clutch had broken which was weird since we changed it not 20 000km ago back in Germany. Nevertheless, we still needed help at a garage, so we got a tow behind a Hilux pickup truck the one kilometer to the garage.

At the garage, we agreed that he would replace our clutch disc for the bargain price of $100. Since it was late in the afternoon, we sat down and watched the men work before one of them, who was a taxi driver, drove us to a nearby hotel when it got dark. When we returned the following morning, the new clutch had already been installed and the mechanic was ready to fire up the car and take it for a test drive. The following minute we quickly realized that it wasn’t the clutch that was broken, it was our gearbox. Although the gearbox now needed to be mended, the mechanic claimed that this was no problem for him and that he could manage it. We decided that we needed more information to make an informed decision and decided to get a hold of some SIM-cards with 3G in order to call a colleague of mine back in Norway who is Portuguese and have him translate for us.

After we had been informed more clearly about the situation the decision didn’t become any easier to make. We had been informed that it would take at least a day to mend, that the entire gearbox needed to be opened and parts replaced and that it was going to cost 110 000 kwanza, about $450. As we first saw it, we had two options, we either leave the car there, maybe sell it as a scrap car and fly back home to Norway from the capital city Luanda or we mend the gearbox and continue our journey with three full days lost and a lot poorer. For a while, the first option seemed as the only result as we didn’t have that much money left and it was still a long drive. If we had 250 dollars in cash we could exchange that with black market dealers and get all the kwanzas we needed, but at the bank, we would get the regular, much poorer exchange rate.

We were a little sad because we definitely thought for a while that the journey would end right there, so close to our destination, after months of and thousands of kilometers on the road.

The solution to our problems arrived later that day. We decided that we would try out the newly thought of third option, which was to first mend the car and then sell it and either fly home or continue the journey by alternative transportation. It was the best option by far, but a gamble since we didn’t know what the car was going to be worth, after all we had bought it for €3800 in Germany and driven it quite hard on the way down. Nevertheless, it was not worth taking the risk of driving further down with a gearbox mended on the streets of Africa, we didn’t want any more problems.

As the mechanic was working on our gearbox and Luis had gone out to fix some temporary import papers for our car that we had forgotten to get stamped at the border, a young Angolan man approached me as I was sitting there, watching the men work. He spoke English to my surprise, which was nice since I was barely able to communicate with the men sitting around the car and we had sat there in silence for a long time. His name was José and we ended up speaking a bit and he agreed to help us translate if we needed it. When Luis came back in the evening, we exchanged phone numbers with him so that we could contact him if we needed a translator. Although he turned out to be the slowest and most unreliable person I’ve ever met, he ended up helping us quite a lot the following days.