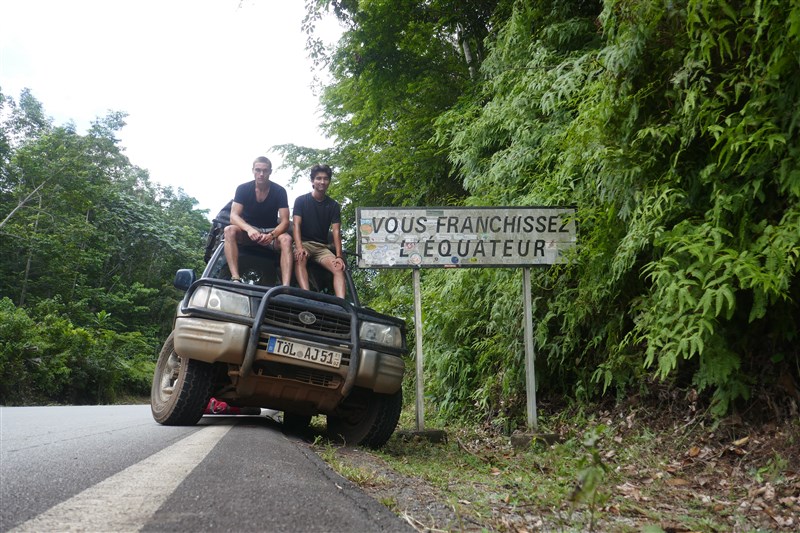 Entering Gabon was actually quite nice. The border was very small and simple, but clean and looked good unlike some of the other borders that we had encountered. The only drawback was the officers that worked there and the bureaucracy of the country. We had to write down our entire travel route through the country and give them two booking confirmations for a hotel that they actually called and confirmed our reservation. This caused some delay and meant that we didn't come as far as planned that day. Therefore, we had to in the yard of a motel in a small town in the north of Gabon, a couple of hours from the border. Here we started talking to the owner who had studied programming in Ghana and therefore spoke very good English. He told us about life in Gabon and could confirm what we already had assumed, that the heads of state takes all of the country's oil money for themselves, which of course the people in general dislike because they understand that the money could be used to improve their living standards.

The next day we left early so that we would reach Lopé national park the same day. On our way to Lopé we crossed the equator which was exciting to do by car since there is a sign where a lot of other overlanders have left their marks. Since we had neither a marker nor stickers, we had to improvise, used a sticker from our «russebuss», and wrote our initials with a normal pen. It was really cool to cross the equator like that, but there was an unbelievable amount of mosquitos there, absolutely crazy. We were standing there for around 10 minutes and got stung several times even though we used mosquito repellents with DEET.

The road into Lopé began just a few kilometers after the equator and it was of course a dirt road with some bad parts. This meant that we spent 3-4 hours on driving 80 kilometers into the park where our wild camp was. Not only did we use a lot of time due to the bad road conditions, but just a few kilometers from the campsite our left rear tire broke and we had to replace it with our already used spare tire. The weird thing was that the tire didn't puncture which would make sense due to the bad roads with possible sharp stones in it, the outer part broke loose from the inner part on half of the tire. Though it's not a big job to replace a wheel in normal conditions, it's a lot more exhausting to do it in the middle of the day with a temperature of 32-33 degrees Celsius and the sun shining on you.

The drive and the broken tire was worth it though, the view driving into the park and the view from the campsite was breathtaking, Africa at its best. That night we also witnessed a thunderstorm of biblical proportions. From 23.00 - 01.00 it was pouring with rain and the lightning strikes were continuous. It got so bad that we had to abandon the tent and seek refuge inside the car in case of a lightning strike. Since the strikes was no more than a couple of hundred meters away at its worst and we were the highest point on the hill, this was a good call. This way we could also watch as the storm raged outside with front row seats from inside our car.

The next days consisted of driving straight through Gabon, with the exception changing both rear tires; we didn't make any more stops other than to sleep. In the town where we got our tires changed we also slept at a catholic mission. Here we met some Americans who did research on energy and water for the villagers through the University of Michigan. They were really nice people and we got invited to join them for dinner at the house of an Indian that was working with electricity. Here we got served chicken curry and though it tasted good it wasn't good for our stomachs at all. Even though we had hardened our stomachs by eating loads of African food, we didn't tolerate the Indian food at all.

On the border road to The Republic of Congo, we got into some trouble when our car got stuck in deep mud in the middle of nowhere. Since it's rainy season the bumpy off road was drenched in water some places and we managed to drive into the deepest end of the track. We had to walk half a kilometer to some nearby houses where some men were sitting and drinking "palm wine". After we had explained our problem to them in poor French, the men put on their boots, grabbed their machetes and pickaxes and followed us to our car. After some clever engineering on their part and some pure strength, they managed to push our car out of the mud. Having payed the men we drove on and reached the border a couple of hours later in the afternoon.