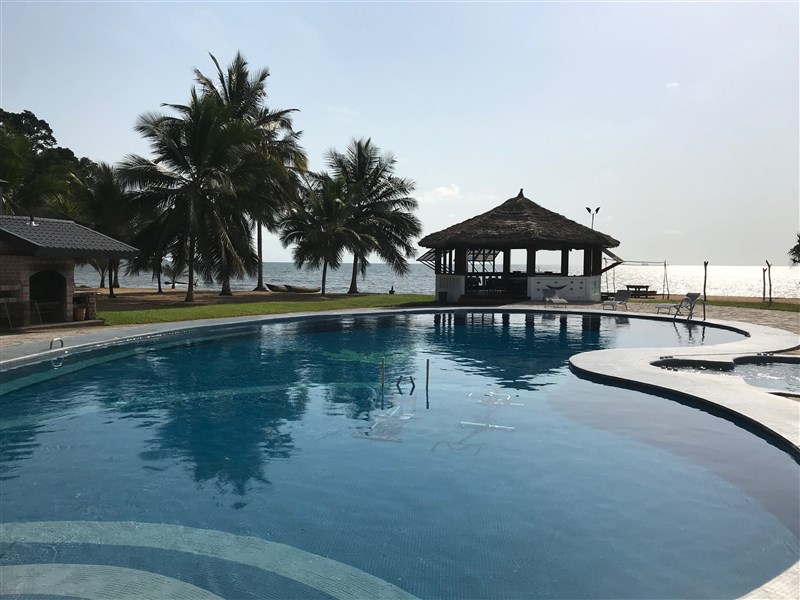 The following morning, having spent the night at a nearby hotel, we payed the military guards that had looked after our car, got our papers stamped in customs and were soon on our way.

After driving for some hours and climbing to over a thousand meters in altitude we got car problems. We first noticed it when stopping for a military control, the radiator was boiling over with steaming hot water. We luckily got some quick help from a passing local who showed us how to air and refill the radiator, but this was only a temporary solution. During the next 20-25km we had to stop 5 times to refill the radiator and let the engine cool. Going uphill we had to creep at a low rpm and then roll the car in neutral downhill to not overheat too often. Luckily we had Patrice with us, who could communicate better with the locals and we eventually found a workshop where they were able to fix our problem.

Mending the broken part, the radiator fan, took quite some time and meant that when we finally had our car running again it was starting to get dark. This was an issue because of the current unstable situation in that particular region. We had no choice but to drive straight to the nearest town and find a hotel for the night and continue in the morning.

The next day we dropped Patrice off in the town of Bafoussam where he would catch a ride further into Cameroon, while we headed south towards Douala. The drive down took the whole day and we entered Douala in the afternoon. Straight away we met up with some of Luis' lebanese relatives who lives there. Although this was the first time ever meeting them, they showed us to a really nice hotel where we could stay for the night and then they payed for the room and breakfast the next morning. They then suggested that when we got hungry that we should go down the street and to a restaurant called "La Sigal" and say hello to the owner from them. So we did that, we went to the restaurant and had a talk with the owner, who is also lebanese and a really nice guy, and he told us that we were his guests and that the entire meal was on him.

The next day we planned on going to a chimpanzee reservation in the jungle outside Edéa before heading down to the coastal town of Kribi. We had really looked forward to going to see the chimps and got really disappointed when we finally arrived and were told that there was new management and that they were closed that day and that we were not allowed to camp there for the night. So we had to drive back to Edéa and sleep at a hotel there.

Arriving in Kribi we were almost blown away and slightly shocked over what welcomed us. We had been invited to stay with another of Luis' relatives, Hazim, who had a huge property near Kribi with a swimming pool, a seperate guesthouse and a staff of 30+ people. We went from from a $15 hotel one day to being served foie gras in the pool the next, needless to say we had a really nice time. We had not lived like this since visiting Henry in Accra so the life at Hazims place was extremely nice for a change.

We stayed with Hazim for a week, sleeping in separate king size beds, swimming in the pool almost every day and having lobster, fish and champagne for lunch. It is no wonder neither of us really wanted to leave by the time that we had to get a move on and drive towards Gabon. But we had to press on if we were going to reach our goal of getting to Cape Town.

The drive from Kribi to the border to Gabon took no more than two days and went smoothly since there are no problems in the french speaking parts of Cameroon.