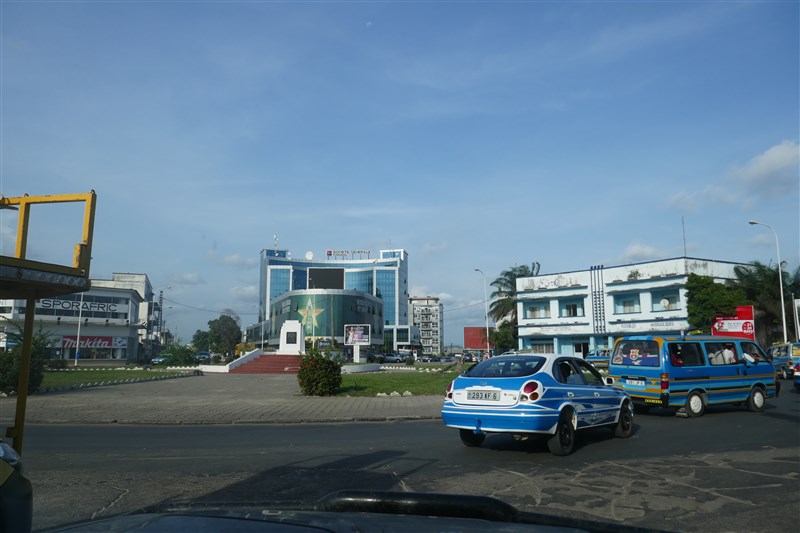 After the usual immigration procedure, we asked the police officers if we could stay the night at the border and they didn't mind that at all, in fact I think that they thought it was pretty cool that we wanted to sleep there. The border had a bar, of course, where all the police officers drank beer, so we could sit down, relax and have a beer ourselves before going to bed early.

The next day we drove on early and luckily the roads were much better than those of the day before. This meant that we were able to reach the town of Dolisie the very same day. In town we camped in the backyard of a restaurant owned by a French expat and eat dinner there in return. Whilst there we met a Lebanese guy who wanted to take us out drinking, so we went out with him to this nightclub and had a few beers. That must have been one of the weirdest experiences I've had in a while, sitting in a club in the middle of Congo. Since we aren't that comfortable going out in Africa we went home quite early.

The drive from Dolisie to Pointe Noire wasn't that long, but consisted in some mountainous roads that cooked our brakes going downhill. We checked into a Chinese hotel in Pointe Noire where all the staff only spoke Mandarin and very poor French and all the guests where of course all Chinese with the exception of us two. The hotel room was nice and we felt that we got quite good value since Pointe Noire is relatively expensive. We had intended to stay from Monday until Thursday while waiting for our Angola visas. Unfortunately, the processing time took much longer than usual and since Easter break came between, we had to wait until the next Tuesday. This was a real bummer, it was both boring since there is very little to do and see in Pointe Noire and we had to spend even more money sleeping at the hotel. We were lucky enough to be able to sleep in the parking of a restaurant owned by a French expat a few nights and in return, we eat at his restaurant that served good stone oven pizzas.

We had lost a lot of time and our budget for Pointe Noir had burst when we finally got our visas Tuesday afternoon. Since we were so fed up with the city we decided to drive straight to Cabinda the same afternoon. After a difficult border crossing, where they wanted four copies of several documents, we finally arrived in Cabinda late in the evening, having driven in the dark all the way from the border.

Since we arrived late in the evening, no one was around at the catholic mission where we had planned on sleeping. However, since we really had no other choice, we had to set up camp in their carpark without asking for permission and just hope that they would be okay with it. The following morning we were woken by praying nuns with the loudest screaming and singing you could imagine. When we packed up our gear and left, nobody seemed bothered by the fact that we had slept there.

We filled up our car with extremely cheap diesel and headed for The Democratic Republic of Congo that day, very excited about what it would be like there.