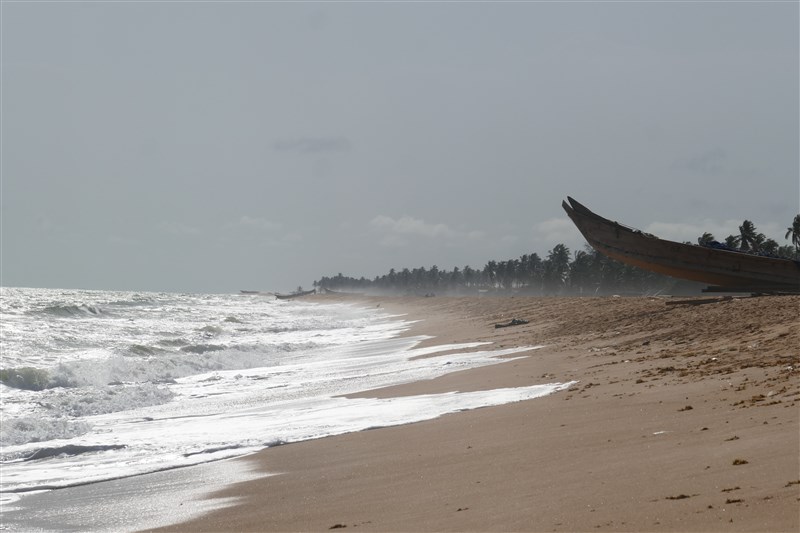 Entering Togo was straight forward and easy enough, except for the the amount of people there. The place was crowded with annoying fixers that never gave up trying to help us. Unlike other bordercrossings, telling them that we don't need help did not help. We finally managed to explain that they were wasting their time because we were never going to pay them anything. Other than that it was alright, we got a 7 day transit visa at the immigration office for 10 000 CFA each.

In Togo we stayed for a few nights at Coco Beach, a campsite located just outside Lomé, the capital city. We stayed for a few nights while fixing even more visas. The beach camp was a really quiet and nice place to relax. They had a cold water shower outdoors under some palm trees. I've never showered in a seting like that before and it was just amazing.

We learned that the togolese economy is run almost solely on import and export. There is a huge port in the capital city that functions as a gateway not only for Togo, but most of their neighboring countries. This creates creates a lot of revenue which again explains why the part of Togo that we saw was pretty developed.

While in Lomé we also visited a vodoo market and learned about their culture and believes. At the councelors office for Congo, the workers were very interrested in a norwegian visa. Therefore they wanted us to write them an invitation letter. We tried explaining that it doesn't work that way in Norway, but they somehow didn't understand this. In the end, the men gave us an extended, multiple entry visa without extra costs in hope that we would write the letter when we get back to Norway.

Since our visa for Nigeria was about to expire we needed to hurry a bit, so on our way to Nigeria we only had two overnight stops from Togo, collecting another visa in Benin. At this embassy, the councelor managed to place the visas wrong, he put my visa in Luis' passport and Luis' visa in mine. Not the smartest guy, but he straightened it out for us while we waited. This took some extra time, but luckily, both Togo and Benin are really small countries when you drive through them from west to east. It was therefore no problem getting to the bordertown with Nigeria the same day.