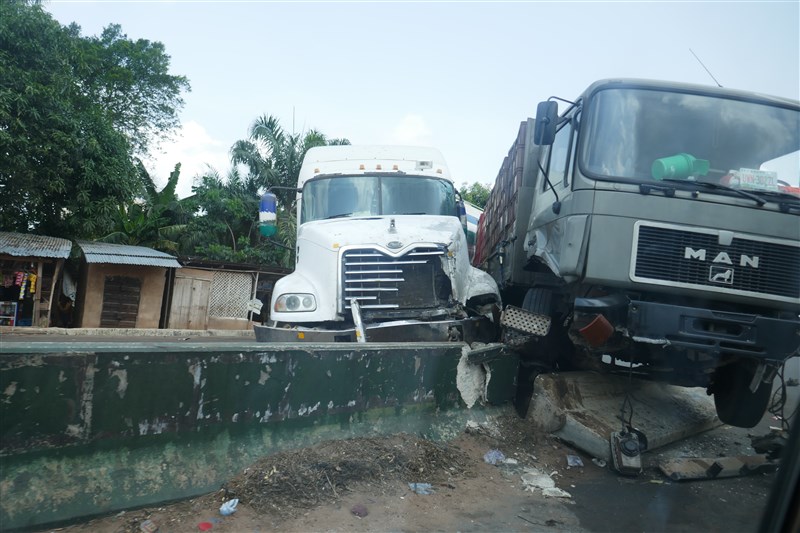 We were up before the sun on the day of entering Nigeria. This allowed us to eat breakfeast before the sun rose, wasting no sunlight and getting as far as possible into the country that day. The plan was originally to reach Benin City on our first day in Nigeria, but we wouldn't make it that far since the bordercrossing ended up taking forever. Even though our visa was alright, the immigration officers must have been the worlds slowest people. It took them half an hour to write in our visa numbers and passport numbers into their computersystem.

Having spent 3 hours at the border we were finally able to leave. It felt really good to be clear of the police and immigration, but that feeling was not meant to last, driving only one kilometer into Nigeria before it all got really bad. There were police stops every 500 meters during the first parts of Nigeria. All they wanted was money, but it was a real hassle because we had to show our passport copies each time, and it allways took a while because we refused to give them cash. One time though it was different, this time the guy made up an excuse to take our money. He stopped us, and asked us if we had a trash bin in our car. At first we didn't understand what he meant, but then he brought out a small, green trash bin to show us. The man insisted that this was obligatory for every motorist to have in their car to prevent littering. Since we didn't have one, he wanted to sell one to us, not letting us drive on without one. After about 20 minutes of arguing with the man Luis ended up telling him that we are fed up and are going to drive away. Suprisingly he didn't mind that decision all too much, he probably realized that he would never be able to squize us for any money. After having been stopped for passport control 10 times, we quit stopping and just drove straight past the officers telling us to stop, unless they were physically blocking the road. This tactic worked most of the time, although some officers got really mad, slamming their sticks on the side of our car and shouting while raising their guns in the air.

Another problem with Nigeria is that it is way to crowded. More than 180 million people live there, making it the most populous country in Africa. Because of this, there are people everywhere. Thats not very nice considering that they were shouting that they wanted to steal all of our money.

We drove through the entire country in just 3 days which is really good considering how big the country is, and the fact that we were only able to drive during daylight. On the last day, at the cameroonian embassy in Calabar, we met this guy from benin. He was working as a tiler and was going to work in Cameroon. We ended up talking a bit to him at the embassy, he spoke quite good english since he had been working in Nigera. When our visas were done and we were set to go, he asked if we could take him across to Cameroon. We agreed to take him, just because he seemed like a nice guy with no harmfull intentions. His name was Patrice, and during the two and a half days that he rode with us he told us about himself, his family and his unseccessful attempt to get to Canada. He was also the one translating what everyone was shouting at us. We didn't understand anything of the Nigerians pigeon english, but he could tell us, with detail, that they wanted to steal all our white peoples dollars. Before we met Patrice, we had been driving through the country not knowing what had been shouted at us.

We reached the border to Cameroon late in the afternoon and because of the curfew in that region, and the fact that the immigration office had closed up, we had to leave our car at the border on the cameroonian side and find a hotel.