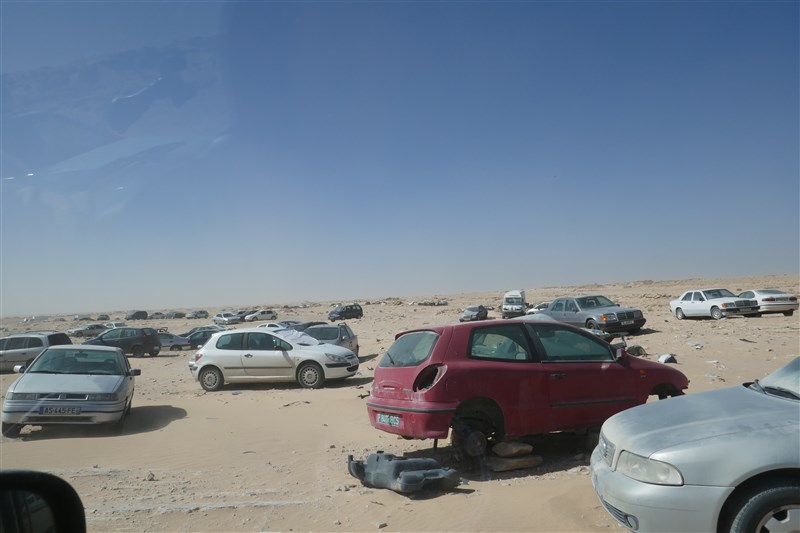 We arrived at the border in the afternoon after a nice drive on the well-built West Saharan roads. The border village of Guerguerat did not offer much, but it had a restaurant where we were treated to a chicken tajine and some tea by Mark and Dagmara (the backpackers). Afterward we went to fill up the car with diesel and spend our last dirham, and take advantage of the tax-free western-saharan fuel. The owner of the fuel station was kind enough to let us camp on-site behind the walls of the property. That evening we had a live performance of street music inside an empty container, a very special vibe. Mark and Dagmara had traveled Europe for around 6 months playing on the streets, and they had brought their instruments with them to Africa.

The next morning we queued up at the border right when it opened at 09.00. It still took us about 30-40 minutes just to get to the first of many checkpoints and before even leaving Morocco 2 hours had passed. While queueing we happened to meet a german couple who are driving to Cameroon. Having been properly checked out of Morocco we entered "no man's land" which is a 5km long space between Morocco and Mauritania. No one has jurisdiction over this land and no rules apply. It is a strange place with no proper roads, loads of car wrecks, and landmines spread out in the desert beside where the cars drive. Before we entered Mauritania we were reminded by a local that we shouldn't take any pictures at the border. We already knew that picture taking is sort of illegal in Mauritania and that you can face fines for taking pictures of a person or their property.

The second we entered Mauritania border guards ordered us to get out of the car and police dogs started searching the car immediately. Having waited quite a bit we really needed the restroom and started heading straight there, suddenly everyone started shouting at us and telling us to stop. We got quite freaked out, but obviously the reason was just that they assumed we were hiding something and needed to empty it in the toilet. The dogs searched us thoroughly and we could finally go. Overall the Mauritanian border took a while to get through since we had to get our visa at the immigration office and visit several offices to show our passports and car documents. The entrance to Mauritania took about two hours. After a total of 4 hours to cross a border we could finally drive southwards.

The rest of the day we spent driving towards Nouakchott, the capital of Mauritania. On our way there we encountered one of the world's longest trains, huge sand dunes, and miles of desolate landscape.