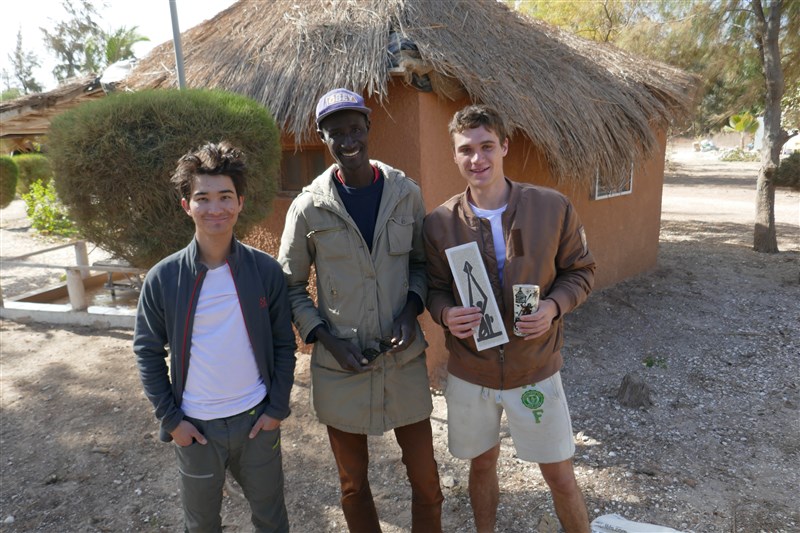 Having spent the night at the border we headed for St. Louis after breakfast. We had to leave behind our dutch friends who had to get their temporary import paper for their car, which could take quite a while.

On the road we immediately noticed a big difference in vegetation compared to the much dryer Marocco and Mauritania. We also noticed a different behaviour of the locals. Everyone was waving and smiling, whereas in the previous countries they are more used to tourists and lighter-skinned people and didn't care so much about our presence. The roads were also very good and smooth, not only compared to Mauritania, but also against European standards.

After a short drive we entered St. Louis, which looked surprisingly nice, the architecture was French inspired and most buildings that we saw probably date back to the colonial era. We quickly withdrew some cash and bought a SIM card for internet access. Afterwards, we had some delicious crêpes for lunch. On the way back to our car we ran into the British cyclists who had entered St. Louis a little after us. Their spirits were high as they had finally reached Senegal and they were planning on staying a few days there before heading for their final destination of Dakar.

In St. Louis we also said goodbye to Mark and Dagmara who wanted to stay there for a while. Having been together for five days it was weirdly empty in the car on the drive towards Dakar.

That evening we decided to stay at a campsite outside of Dakar next to lac Rose or lac Retba which is its official name. The name says it all really, it's a lake that turns pink when the sun hits it properly. The next morning we went to have a look at it, unfortunately, the lake only had a weak red colour that day. However, we did meet a local who guided us around and had some interesting facts about the lake. Since it contains a lot of salt it is a huge business extracting it from the water and selling it as table salt, exporting it all over Africa. The guide also made art out of sand depicting lac Rose and other motives which we ended up buying some of.

Afterwards, we drove down to Dakar where we planned to stay at a hotel for one night. This suddenly turned into three nights when we found out that the Guinean embassy closes earlier on Fridays. So we had to stay until Monday which meant that we were able to enjoy some of the few sights that are in Dakar. One evening we eat dinner at the westernmost point of Africa, Pointe des Almadies. On Monday, while the visas were being prepared, we went to see Africas' tallest statue, the African Renaissance Monument, which was very impressive.

When the visas for Guinea were ready, we drove out of Dakar heading southeast towards the Guinean border.